Misfortune of a damaged past, Warning: Violence (Adryanna, Open) 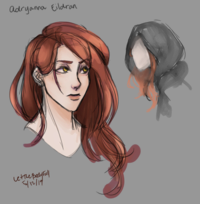 Misfortune of a damaged past, Warning: Violence (Adryanna, Open)

Rain pelted the earth, merciless as a raging god about to destroy all of their creations. There was nowhere for her to hide, no trees nor rocks large enough to hide her was in sight. The river was an option if she wanted to have her lithe body shredded by the fast moving current and the stones. It was dark, with only flashes of lightning illuminating the land for a split second before engulfing everything again in total darkness. She tried not to think of it. Getting away was priority. Getting far away was life and death. Just get away, get away get away!

Her legs burned, her lungs about to burst. She's been running far too long, far too fast, and yet they were still pursuing. Where did they get that.. that creature?

They were a group of Faetouched, which wasn't surprising. No normal human would be able to tackle the rocky and muddy terrain in the dark this quickly, much less during a storm. She was barely hanging on herself. She swerved, cursing when her hair caught into a twisted branch. Pulling it out as harsh as she could, she let out a screech of pain before sprinting forward. If there was a god, please don't make her head bleed. Once they've scented blood, she'd never get away from them.

Just reach the forest, she thought over and over. They wouldn't find her there, hopefully. The dense trees and rain would hide her scent, no matter how powerful their senses were. She just had to--

An arrow pierced through her leg, making her stumble forward. Rocks so sharp shallowly sliced through exposed skin and the wet mud was clinging on to her body. She tried to get up but a hand grabbed a handful of her hair and yanked her head up, golden eyes locking into reddened ones. "You can't run away forever," a gravelly voice said as they hoisted her up before grabbing her neck and slamming her to the nearest tree. "Tell us where it is and you die."

She tried to breathe but can't. The hand was so strong that she couldn't even have it move a smidge from her neck. "I-i don't know where it is!" It was the wrong answer, apparently, as the vice on her neck only got tighter. Adryanna tried to claw free, her dagger was missing. She tried to scream, deny everything because she really didn't know anything, and her vision just started to dim, slowly, slowly, until-

Adan was sitting at a trunk of a tree watching as the rain trickled to his feet, it didnt really keep him dry but It was the best he could find consider he was in the middle of the woods. He could go back to the guild which had food, Walter, and warm place to rest, but he rather sit out in the cold rain than deal with this guild leader constantly bullying him. He looked through his bag, which he had grabbed before sneaking out, and took out a small lantern, lighting it in hopes it will keep him a little warm.

Off in the distance bickering and talking can be heard, he turned to where the noise was coming from, confused ‘who would be walking through the woods in this kind of weather?’ He thought. Picking up his lantern he slowly walk to where to noise is coming from, the faetouch was hovering over adyranna, Adan looked over at Adyranna, noticing that extremely hurt and beaten up. He started to panic, taking his lantern he threw at a tree that was good distance away from him, creating a loud thud.

The Faetouched turned, confused as to what the sound was. Thinking that it was just a random tree branch or debris that got tossed due to the force of the storm, they ignored it, although one at the back stood back to keep watch. They were near Pride territory so it would be dangerous if any one of them knew of their presence.

Turning their attention back to the woman, now unconscious, their leader loosed his grip on her neck before signalling the larger Faetouched that he luckily recruited a few months prior. "Take her," he said before tossing the limp body into the creature's large arms, hefting her up over his shoulder before standing at full height. Their leader nodded, then signalled for them to move a bit deeper into the forest but away from Pride territory.

Adan sigh picking up his lantern, it was cracked but it still somehow worked, he follow the faetouch figuring he wouldn’t be able to fight them by himself since he wasn’t what people consider ‘strong’. He tried his best not to step on any twigs or crinkly leaves that might cause too much noise but he was having trouble seeing, and ended stepping on a few anyway.

Adan was slowly but carefully following them, when thunder struck creating a loud bang. Adan screamed and stumbled to the ground in front of Faetouch, coving his ears, he didn’t really think about the possibility of there being thunder when he snuck out of the guild.

The scream made the others go on full alert. The leader of the group turned, searching for where the sound came from but was irritated when the rain muffled the noise. Not taking any chances, he told two of his men to investigate. It might be a spy and they will be dealt with. Adryanna stirred, a little bit of her breath returning. Her eyes were blurry from both the pain and the storm but she could feel being jostled as if she was being carried. Mentally cursing herself for being captured all to easily, she tried to think of a plan to escape even though she knew that she wouldn't be able to take on a whole group of Faetouched.

Loud thunder struck the ground again, Adan covered his mouth to prevent himself from screaming. He slow stood up, ducking behind a tree he noticed that Adryanna was wake, he ran to catch up with her, not even caring about the fact the other faetouches might looking for him, he just wanted to get out. he tried waving at her hoping that she’d see him